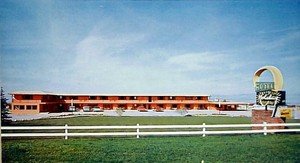 The breakdown of a train in Helena in 1912 inadvertently led to what is now the Ramada by Wyndham Helena (formerly Jorgenson’s Inn & Suites) and Jorgenson’s Restaurant (now Jorgies’ Grill).

The Jorgenson’s story began when Fred Jorgenson, a young Danish immigrant, was traveling through Montana on his way to California. The train broke down in Helena and by the time it was repaired several days later, Jorgenson had decided not to continue and, instead, to make his home in Helena.

He found work as a cook at Mount Saint Charles College, a Catholic college in Helena, which was the forerunner of today’s Carroll College. After seven years at the college, Jorgenson moved over to Helena’s Montana Club, the oldest private dining establishment in the state. He remained at the Montana Club from 1919 to 1950, then he retired to enjoy a life of fishing.

But retirement didn’t appeal to Fred Jorgenson and in 1951 he opened Jorgenson’s Grocery, Catering and Locker Plant in downtown Helena together with his daughter Lucille and her husband Cal Rush, his son Chuck and his wife Jean, and another daughter Ruth and her husband Don Larson.

Starting with only “two frying pans and a stove” Chuck Jorgenson’s family catering business quickly became a success. By the time they closed out that portion of the enterprise, they were able to handle as many as 1,500 people at a time. They had all the necessary table service, tables and chairs, and they catered events, serving hot food as far away as 200 miles.

Jorgenson’s catering was popular for farm and ranch auctions, weddings and conventions. Jorgenson’s was also a Helena tradition for Thanksgiving and Christmas turkeys, often preparing more than 200 turkeys for a holiday, complete with dressing and a pot of gravy. At the same time, the Jorgenson family also operated the kitchen at Helena’s Frontier Town, a replica western village located 15 miles west of the city.

After leaving Frontier Town in 1957 and selling the catering business in 1958, the Jorgenson family decided to build their own restaurant. Jorgenson’s Restaurant (now Jorgies’ Grill) was built adjacent to a 37-unit motel near the state capitol in 1958. The motel was later purchased by the Jorgenson family and was expanded into a 112-room complex.

Jorgenson’s became a landmark in Helena. Its convenient location near the state capitol and quality restaurant and lounge attracted numerous business travelers, state officials, legislators & lobbyists who made Jorgenson’s their “in town” home.

From humble and hard-working beginnings the Ramada by Wynham Helena continues the tradition of success established by the Jorgenson family.